I don’t harbor any ill will towards Victoria’s Secret, mostly because I systematically ignore 93% of the store when I go in. Maybe it’s a hangover from high school, but I do love the thrill of buying 6 pair of undies for $25 and getting to pick out different, completely slutty but still strangely adorable patterns that are vaguely seasonably appropriate. A time or two I’ve even picked up a normal looking bra without memory foam or a mattress pad in the cup and purchased it. All in all, I’d say Victoria’s Secret is what you make it. If you stand in the PINK section, you will start to feel old and soft. But that is your own fault. You are standing in a section of clothing devoted to 18 year old girls and their pretend workouts. Do you remember pretend workouts? Those were the best. A few laps around the gym, a couple of minutes on a treadmill, water from the bubbler, and then a steam shower. And you weighed 100lbs. You are not that girl anymore. It’s someone else’s turn. Now get out of the PINK section before you accidentally buy a pair of pants that says PINK on them and you think that’s okay. (You see, PINK is not a sports team. Neither is PINK a well-engineered athletic performance brand. They do not invest in endurance testing for optimum performance. They invest in creating work out gear for fake workouts. And yoga classes that don’t take place. Ever.)

Due to my occasional undie binge, I am on the Victoria’s Secret mailing list. I don’t think I’ve ever opened the catalog; it usually goes directly into the trash, but when I got it this week, I needed something to distract my child. So, like any good mom, I picked the VS catalog as light reading material. He was captivated. When we got back into the apartment, he was distracted by some Cheerios he’d spilled on the floor that morning and wanted to eat, and immediately dropped the catalog, where it landed open on an image that caught my eye: 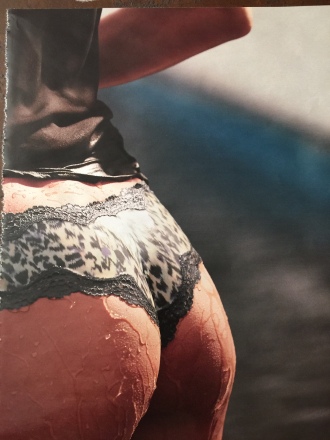 Now, before you think I was all bent out of shape that my 17-month-old saw this image, stop. I couldn’t have cared less. I was more surprised because, believe it or not, I own those undies. Yes, I bought them before I had a baby, and admittedly they look a touch different on my rear, but none-the-less it was enough to get me to pick up the catalog. That’s when I noticed she was all wet. Cue the internal monologue of an obviously-not-twenty-something-woman:

Well why on earth is she all wet? It’s not a bathing suit. Ugh. that’s going to give her the itchiest vagina. I hope she took them off before they started to dry. Those undies don’t breathe well at all.

I was really baffled by the impracticality of getting wet in those undies. I actually did get wet in a pair of those undies once and can speak from experience– they do not breathe. I continued to flip through the VS catalog, applying the same ideology to the catalog as I do the store: ignore, ignore, ignore. But I did come across a few things that I could not ignore. Not because they were photos of unrealistic bodies in insanely stupid under garments (who the FUCK can wear a neon green bra? What kind of clothes are you wearing over it? Because nothing in my closet would cover a green bra.), but because someone in design legitimately failed.

Here a few of the Victoria’s Secret Fails: 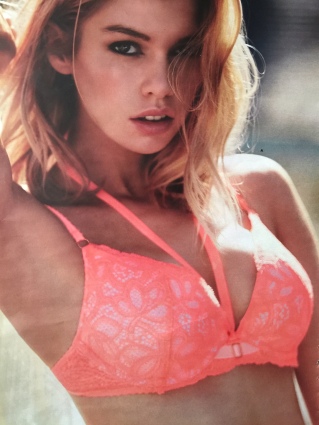 For centuries, women have worked to conceal our bra straps. We even have bras with no straps at all. So what is this? The only scenario in which I could imagine this bra being made would be when 7 MIT engineers got in a room and tried to think of a way to keep some 700lb woman’s boobs from laying on her stomach. We’re simply going to have to add an around the neck hoisting strap, Chang. Yes, Jong, I think you’re right. It won’t look good, but it will be effective. 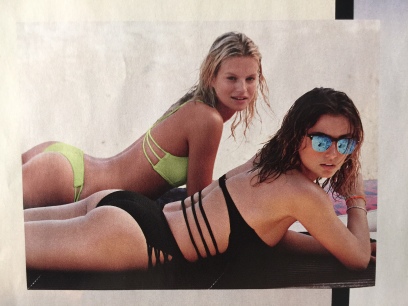 Oh, is your regular bathing suit not offering enough opportunities for unsightly back fat? GOOD NEWS. Victoria’s Secret has this amazing new suit with micro straps that will provide just enough pressure to make your back look like Play-Doh. They best part will be when your soft, plush back has tan lines that make it look like it is rippled. Like a Ruffle. If you have a bestie who suffers from the same problem but has a flatter stomach, there is a two piece. Thank GOD. 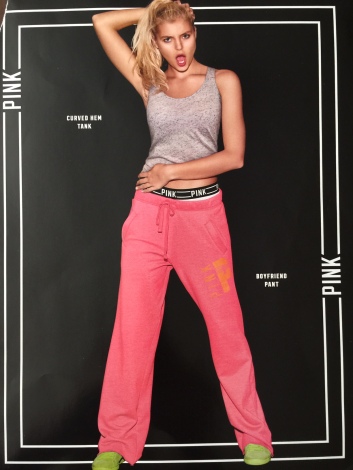 What work out is she going to? Boxing with My Little Ponies? Not jogging, obviously, because everyone knows you have to wear a sports bra to do that. I guess maybe she is just as shocked as we are. They just told her that PINK isn’t a high performance athletic brand and her self of identity has just been called into question. It’s okay, Mindy. Do you need a paper bag to breathe into? 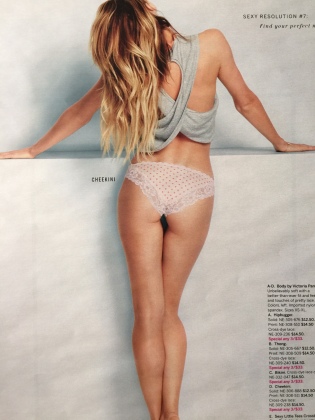 Trying this on in the dressing room will be the first and last time you EVER figure out which hole is for the head. Despite the obvious fact that this shirt has no purpose in the universe, it’s the clothing equivalent of one of those metal puzzles where you are suppose to try to separate the rings, but instead you don’t. BECAUSE YOU HAVE NO FUCKING IDEA HOW TO DO IT. 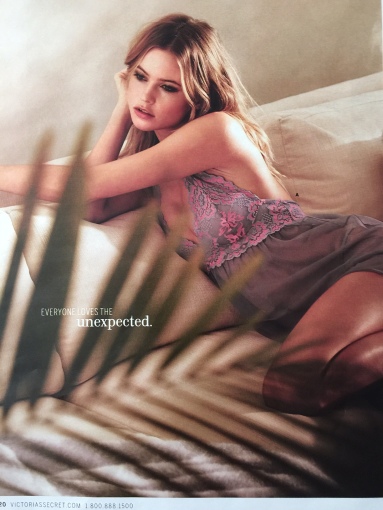 This is actually a really sweet little nightie thing and if I were five five and ninety pounds I would buy one. Too bad the caption “Everyone loves the unexpected” is coupled with a photo that could only have been taken by a predator hiding in your own home while you relax in your nightie. So as much as I fancy myself someone who loves “the unexpected,” I’m going to have to pass on potentially being raped and murdered in my own home by a guy hiding behind my palm tree with a scope lens. Thanks though!